A Short Walk in the Western Fells

Only the seasoned Wainwright bagger and local residents of West Cumbria will ever have heard of the hill called Grike but for everyone else it's the westernmost of the Wainwrights or Lake District Fells, and stands next to Crag Fell whose far side rises splendidly above Ennerdale Water. In the mist and rain this area is bleak and lonely indeed but when the sun shines it reveals a side of the Lake District most tourists never see. Lonely it certainly is but that is part of its appeal.

Leaving the minor road that links Gosforth and Ennerdale Bridge I followed the track that leads into the hills from just south of Kinniside Stone Circle. The ancient monument itself is well worth a visit before setting out and if you're not walking is a worthwhile destination in itself. The track led over open fields before reaching patchy coniferous forest beyond a gate and climbing at an 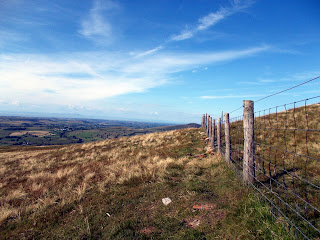 easy gradient to meet another track coming up from woodland below. Crossing this trail, the open fellside was gained close to a low col and I took the left hand of two tracks in a roughly easterly direction over open grassland. After a short distance - perhaps a kilometre or so - I left the trail and crossed a stile to climb the sheep cropped turf to the left up to the large cairn on the summit of Grike.

At 488m this is no great height but its position as the westernmost of the Wainwrights affords a wide view over the West Cumbrian Plain and the Irish Sea as well as ahead where the grassland rises steadily towards the more rugged terrain of Pillar, Scoat Fell and Haycock on the horizon. Leaving the cairn I headed on down into the dip between here and Crag Fell which is slightly higher at 523m. The low ground is boggy and it's maybe better to return to the track which lies just beyond the communications mast right of the dip but I didn't and got slightly wet.

The top of Crag Fell is impressive for a lesser fell and commands an eye catching panorama of the head of Ennerdale above a steep drop to Ennerdale Water. It is well worth journeying the short distance beyond the cairn to the next minor summit where the view is even better and brought to mind the walk along the top of the Screes from Whin Rigg to Illgill Head above nearby Wastwater.

These lower hills often provide an experience in excess of their stature and these two remote and seldom visited summits are no exception though today the weather contributed to the experience with blue skies and far off views forming a backdrop to the empty miles of Lakeland's western rim. What had started as a mere peak bagging exercise to achieve two more ticks towards finishing the Wainwrights became a fine walk in itself.To return I merely headed south from Crag Fell to join the original track further up and follow it back to where I had started for a total outing of just under 9km or 6 miles.
Posted by Pete Buckley at 20:11

Hike the Alps on your kindle...

Pete Buckley
I'm Pete Buckley the UK based indie author of "The Colonel of Krasnoyarsk" a high speed adventure thriller in which the reader is introduced to Russian Agent Colonel Yuri Medev and Jim Bergman of the FBI who must overcome political differences and work together to defeat a dangerous enemy - perhaps some of our politicians should read it to find out how. I have just finished the next Yuri Medev adventure entitled "The Kirov Conspiracy" due for release soon, while previously I wrote a couple of travel stories about various wonderful places such as New Zealand and the Swiss Alps. Aside from writing, travel has always been a big inspiration with hiking, biking and the outdoors taking up much of my time when I'm not looking after the kids. Thanks for visiting.